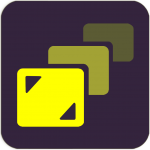 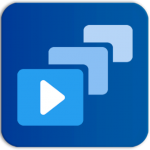 The stage is where you reposition your slices to align with their physical position on the stage. If you like, you can use a guide to help you with this.

Folding screens or hiding slices indicates that you don’t want to use those slices on your stage. Maybe they’re cheat slices you’re using for some other nefarious purpose. Maybe you’re doing some kind of wacky slice routing, in which case I frown with the wind in your general direction. Whatever the reason, hiding a slice in StageFlow will effectively stop it from being rendered in Resolume. Ideally though, you will have only one set of slices in Resolume and thereby in StageFlow, all of which are active and being used in an actual output.

Recreating the lay out of the stage is the core feature of StageFlow. You do it by simply dragging the slices to where they live on the stage. You can also lasso multiple slices and drag them at the same time.

If needed, you can scale and rotate using the edge handles. You can hold down Shift to scale proportionally and/or hold down CTRL to scale from the center. Holding down Shift while rotating will snap to 22.5 degree increments.

If you’re so inclined, you can nudge slices into place one pixel at a time using the arrow keys. Hold down Shift to nudge 10 pixels at a time.

You can go as large as you want, you don’t have to worry about processing power or resolution. You can add as much negative space between slices as you need. If panels overlap, like a DJ booth in front of a larger back wall, you can just place them on top of each other. If panels have different pixel pitches, you can scale up the higher pitch panels to match their physically larger size.

If at any point you feel you’ve done a booboo, you can hit CTRL/CMD-z to step back.

To get around the canvas, you zoom in and out by mouse scrolling / 3 finger swiping. You can pan the stage by moving the mouse and holding down spacebar or middle mouse.

To get the most out of StageFlow, you should always build out from the center. So start by taking the slices making up the center of your stage, and position them in the center of the StageFlow canvas. Then work out towards the sides, making sure that slices line up relative to each other.

This means that if your stage is horizontally symmetrical, slices to the left and right should always be at the same exact same distance from the center. If slices are grouped together in a grid, the distance between each of them should always be the same. This ensures that content displayed on those slices will look even and balanced, instead of unordered and messy.

Of course, there are cases where eyeballing is more important than relative symmetry. A good example is Cosmic Meadow at EDC Vegas, where the vertical panels in the top half are designed to join together to make one screen. Of course, it’s impossible for the stage riggers to physically hang the panels perfectly, so instead we use StageFlow to adjust for any misaligned positioning (and in this particular case, difference in pitch between the panels in the top row and the two panels at the bottom). This way, we end up with a single continuous image when using the canvas as a whole.

To help with alignment, StageFlow has an advanced snapping feature. Of course, slices will snap their corner points to other slices and to the center of the canvas. You can select which corner point gets used for snapping by dragging the slice near that corner point.

If snapping gets in the way, you can toggle it off by hitting the magnet icon in the toolbar or temporarily disable it by hitting CTRL while dragging.

If you’re so inclined, you can also fill out exact values by hand using the Inspector on the right of the screen.

StageFlow comes with a very powerful testcard. You can find it in Resolume’s Sources tab as SF Testcard. The testcard will create a single stage spanning image, taking into account gaps, overlaps and pixel pitches, while only rendering the visible pixels.

When this testcard is active and playing as a clip, it will update automatically to any changes you make in StageFlow. This is very useful if you’re programming on the actual rig because you can see the result of your changes live on the stage.

The testcard comes with controllable line and radial wipes to help you really dial in those relative positions.